Industrial X-ray testing techniques can generally be devided into conventional and digital methods.

With film techniques, the image information is captured by a film that is radiation sensitive on both sides. After the exposure the film is processed by a chemical treatment, either manually or fully automated by a film processing machine.

Film viewing and evaluation is done by using special illuminators. The optical density of any point of the film can be measured by densitometers. Areas that represent too thick walls to show the minimum required optical densities cannot be evaluated initially. The same applies to areas with too high densities representing too thin walls. These areas require additional films with suitable densities. This can be achieved by using several films with different sensitivities in one light protective bag (multi film technique). This increases the so called covered thickness range, which is the maximum wall thickness difference that can be captured with one exposure. 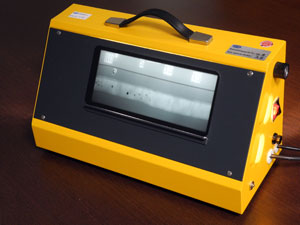 Usually, films are put between two metal screens (mostly lead), in order to reduce the disturbing influence of scattered radiation and to intensify the image building radiation.

Radiographic testing with film is characterized by a complex work of standards that have been under development for decades. These standards define rules for the execution of tests, qualification of personnel, properties and verifications of used tools and devices and the evaluation of films. In most cases European standards (e.g. EN 17636 for weld inspection or EN 12681-1 for inspection of castings) or US standards according to the ASME Code are postulated.

The advantages of the film technique are a much larger range of applications and lower investment costs. X-ray films can be cut to the required sizes, are flexible, lightweight and easy to place. The image quality of thick-walled objects is much better than with digital methods. X-ray films can be digitized. This offers an easy alternative for archiving and copying.

The disadvantages of film radiography are the high material costs because of film and chemistry consumption as well as the missing real-time imaging. The result of an exposure cannot be discovered before film processing.

With digital techniques the image information is captured by a radiation sensitive detector. There is a distinction between detectors that are directly read out (e.g. rigit flat panels) and detectors that are read out by scanners, so called CR systems (computed radiography systems) with flexible storage imaging plates.

Signals of detectors with direct read-out are converted to gray value images that can be displayed on monitors. Storage imaging plates have to be read out by special scanners before a digital image is produced. 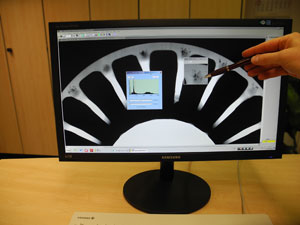 As primary energies for the inspection of thin-walled or lighter objects are lower, the detectability of discontinuities is comparable between film and digital techniques. But the thicker the walls and the denser the material, the higher is the required radiation energy, which means, that the achievable image quality is more and more reduced with digital techniques in comparison to film techniques.

The advantages of digital techniques are

The disadvantage of digital techniques

Test Laboratory accredited by DAkkS according to DIN EN ISO/IEC 17025. The accreditation is valid for the test methods specified in the Certificate.